How do you create an exhibition that celebrates over 100 years of a building’s history, whilst also looking to the future? All whilst not being able to access or bring people into the building, because of a state of disrepair. That’s the challenge I faced when curating and designing the opening exhibition for The Leas Pavilion Archive.

The whole project took place over five weeks, with communication happening mainly through WhatsApp and email.

The project started with a rather unique form of research, scanning and archiving over 200 physical artefacts for the Archive. This gave me a firm understanding of the building, it’s 100-year history, and the events that happened under its roof during that time. Something that greatly inspired the content that would be in the exhibition, as well as the story and journey the exhibit would take visitors on.

I also undertook research, using tools like Wikipedia and local history websites, to understand the history of the building outside of the performances and photos we were provided with.

The first part of the exhibition to be designed was the flyer. Based on the branding I had previously worked on for the LPA, as well as inspired by the visual language of previous flyers created for the building, as well as modern flyers used for such events, I produced an two-sided A5 flyer that contained all the relevant information for the event, and that would be something people were happy to hold onto. 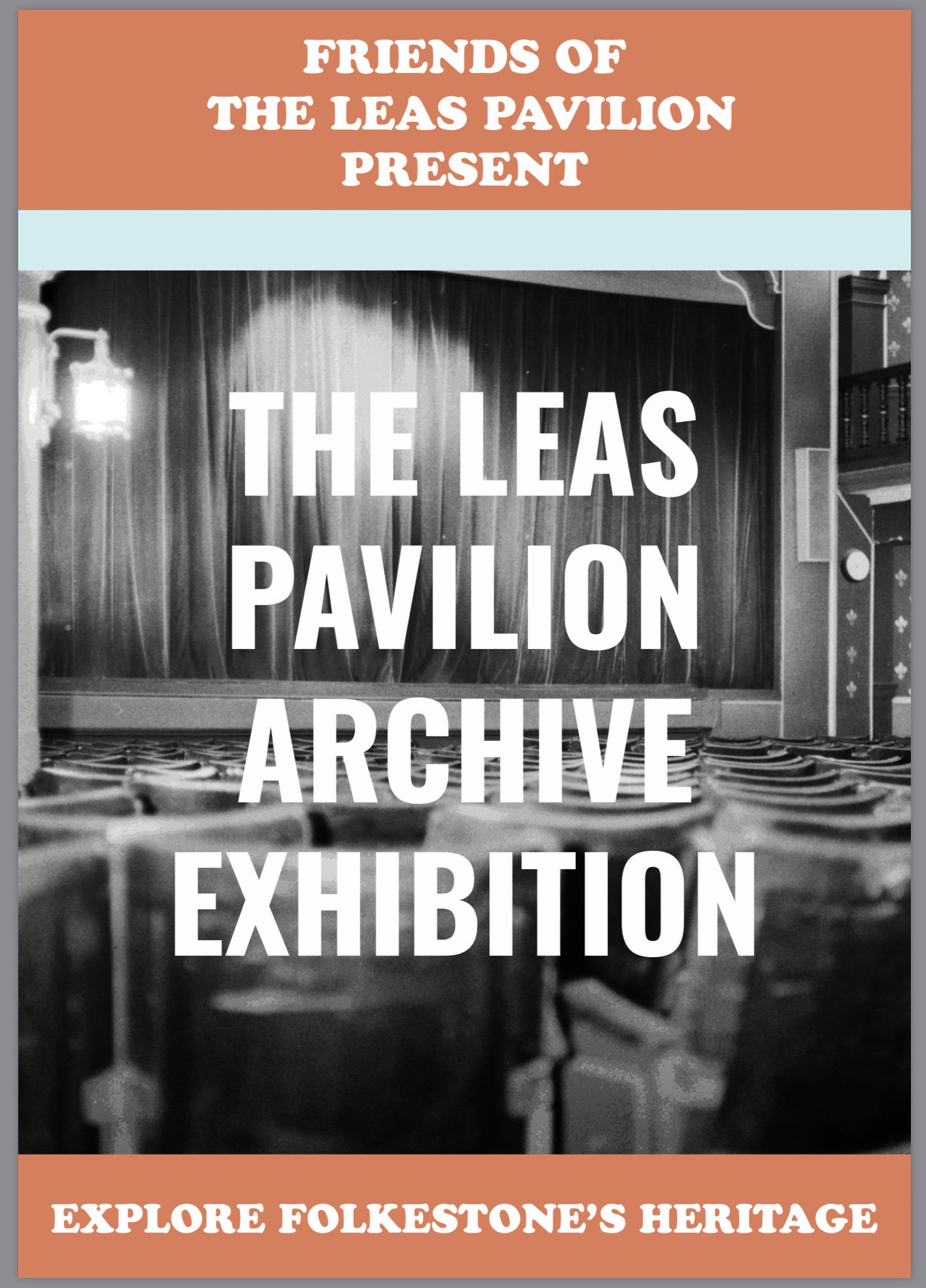 After the flyer was designed, the longer process of creating the artboards for the exhibition could begin. Originally, the brief and conversations with the Friends of the Leas Pavilion had asked for the design of eight artboards. But, development conversations and a feedback meeting during the process expanded this to ten boards, to properly accommodate the history of and vision for the building.

Early in the process, it was decided that the size for the board would be 120cm by 90cm landscape. This would give the board plenty of room for the information and images we wanted to present, as well as making sure they didn’t feel swamped out by the walls of the space. It turns out that designing for 120cm by 90cm boards is rather difficult on a 29” monitor, with the scale of things not becoming truly apparent until we did test prints at 100% size.

Working with a local printer, Folkestone Printing, we also need to decide on the material the boards would be printed on. The three options were Corex, Foamex and Aluminium Di-bond. Each of these materials had its pros and cons.

Corex is the material which Real Estate Agent signs are made from. It’s lightweight, takes ink easily, and is relatively cheap - making it ideal for use outside for For Sale signs - but these properties also made it feel too commodity for use in an exhibition. Plus, there was potential for the boards to get damaged in storage, due to the flexible nature of the material.

Foamex is similar to foam board, and is available in a variety of thicknesses. It’s lightweight, but can be given either a Matte or Gloss finish, depending on what you’re printing onto the board. The material can be dented, but when handled with care provided a mid-priced solution for a mounting and printing medium. Ultimately, 5mm Foamex is the material we went with for the exhibition. With a matte finish, so as not to have too much reflective glare from the overhead lighting in the display space.

Aluminium Di-Bond is a premium medium created by laminating sheets of aluminium with other materials. It’s a great medium for images and artwork, and was the leading candidate for our clients. The application of a gloss laminate would also allow for the boards to be displayed outside, perhaps on the hoardings around the Leas Pavilion itself. But, ultimately, the fragility of this material (especially at the corners) and the weight of the final products meant that it would not be suitable for hanging in an exhibition space where it would need to be put up and taken down.

Once the material - 5mm Foamex - was decided on, it was time to design the graphics to go onto the boards. These graphics went through multiple iterations, right up to the print deadline, to get the message, composition and visual language right. 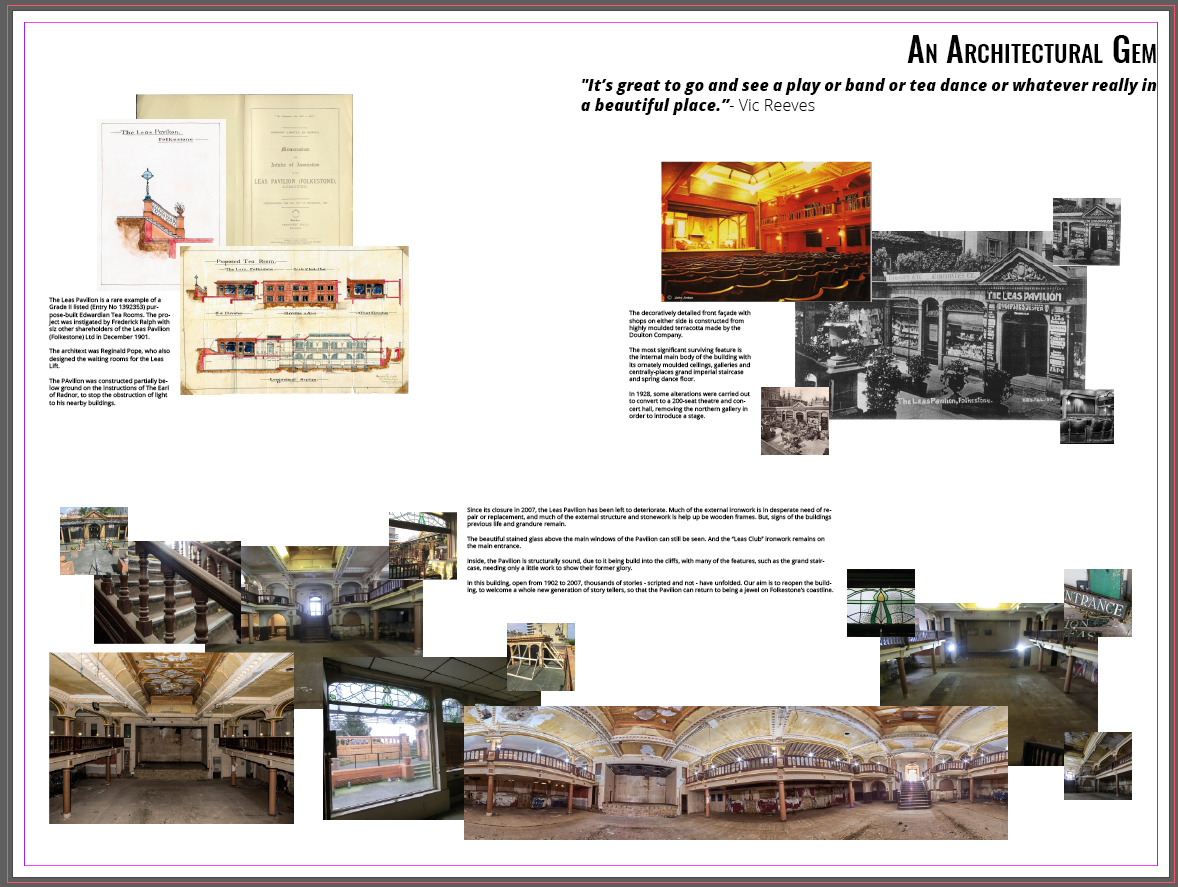 A0 window posters would provide the main signage for the event space itself, helping to draw in passers-by as they shopped on the main high street in Folkestone. One of these posters, printer in portrait, was an enlarged and repurposed version of the A5 flyer that had been given out before the event.

The other, presented in landscape, was an image of the original architect’s sketch of the building. This image helped draw in both people who were familiar with the building and recognised its profile, as well as those who’d never seen the building before, who were interested in the colourful plans handing in the window of what was once a phone shop.

The souvenir brochure, which folded out from A6 to A3 size, was given to all visitors to the exhibition. On the inside of the brochure was a print of the architect’s drawing with text overlaid.

On the outside, six panels allowed us to share some of the highlights from the exhibition, giving people an aide-memoirs of the exhibition.

Working with StickerMule, we created square badges in two designs to give out to visitors to the Archive Exhibition. Reception of these was very good, with everyone wanting at least one of each. The modular nature of the LPA brand allowed us to create these badges without having to distort or damage the logo. 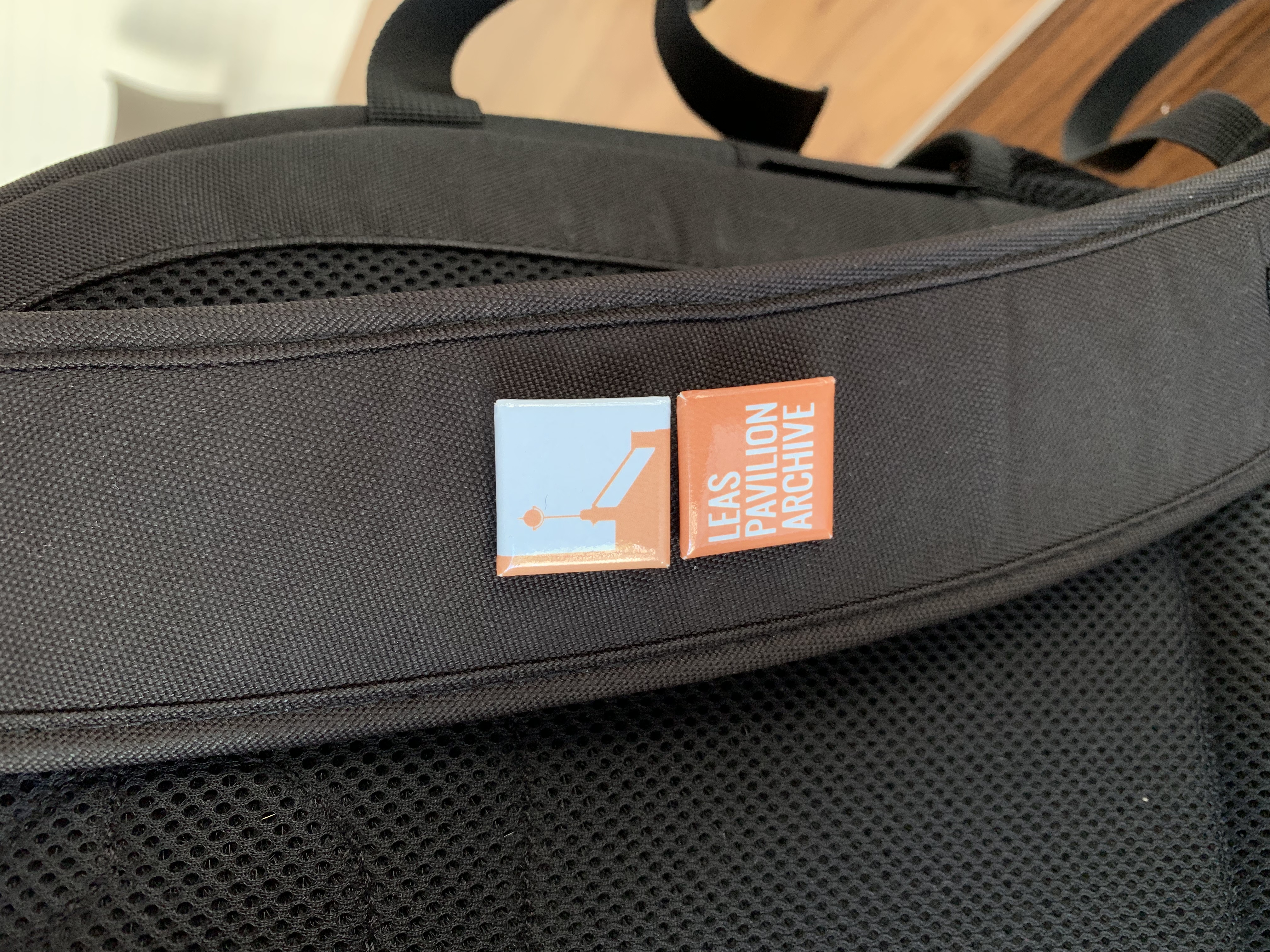 Every element was brought together on the official opening night, after a dry run on Sunday. With the attendance of famous guests and local supporters of the Leas Pavilion, the boards, posters, flyers, brochures, badges and t-shirts all came together with food, drink and chat to create an electric atmosphere for the opening night.

As a special feature of the opening night, I presented the 360-degree video taken by the Creative Computing course on an Oculus Go VR headset, allowing us to bring the building to the people, as we couldn’t (at the time) take the people to the building.

The opening evening served as a great opportunity for me to present my work, answer questions, and meet some of the people who had been involved with the Leas Pavilion Theatre and Leas Club over the years.

Public reception of the exhibition was incredibly positive during the time it was open. Visitors loved the boards, the story we told through the design, as well as the souvenir badges and brochures. Some visitors even wrote about their love for the exhibit in the guestbook.

The client - the Friends of the Leas Pavilion - were incredibly happy with the quality of work delivered, the timescale in which it was done, and the value for money I and The Edge provided. Whilst the final deliverables expanded from the original scope of the project, as is often the case, this was done without missing deadlines or having a mad rush towards the end of the project. This was mainly due to the continued use of WhatsApp during the project to keep in real-time communication, allowing for feedback and update meetings to run smoothly, when needed.